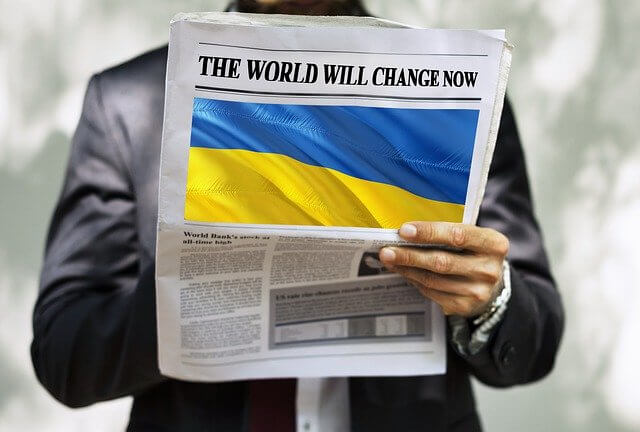 I’ve been thinking a lot about the meaning of “sanctions” these days.

The mixed messages from German companies are having a strange effect on the blogosphere. A few prominent German manufacturers have “voluntarily withdrawn” from Russia. VW, an often-cited example, closed its plant in Kaluga. The video report about the closure highlights the fact that workers are still receiving their wages. Dmitri Surosov, the employee interviewed for “Weltspiegel,” happily notes that he’s got a paid vacation. Comments on the video are correspondingly cynical.

Facebook-reposts of this news piece are likewise divided: Some Russians living here are ashamed of German collusion with Russia’s war economy. Some Russians living in Russia, like Dmitri Surosov, jubilantly share the message, which, for them, proves that German businesses are still focussed on securing their business location, their “Standortsicherung”: They are quietly paying Russian employees and impatiently waiting for this unmentionable war to pass. What else can one conclude from VW’s webpage:

This sense of “responsibility” for Russians is a hard sell. Just four days ago, on the 2nd of April 2022, the Handelsblatt reported that the EU-Commission in Brussels was considering how to allow Ukrainians fleeing to Europe to exchange their own currency (the hryvnia) into Euros—“a month and a half after Russian troops marched into Ukraine,” as Deutsche Welle bitingly remarks. Currently, no European banks accept the Ukrainian currency. The presumably “generous” plan is to allow Ukrainians to exchange a maximum of 10,000 hryvnia, the equivalent of just 310 Euros. For the moment, the plan is stalled because there is no mechanism in place yet to make sure that Ukrainians here don’t exchange more money at more than one bank. As if that weren’t fair.

So when they leave their country, that’s all the Ukrainians can take with them.

The word “sanction” is a self-contradictory concept: The word means both “approve” and “restrict”. Rarely do the two meanings coincide. But, in this case, they do.

So what are real economic sanctions? Few politicians openly discuss how economic sanctions work. As Tom Stevenson recently wrote in the London Review of Books (published on the 24th of March 2022), sanctions against Venezuela have “‘reduced the public’s caloric intake, increased disease and mortality (for both adults and infants) and displaced millions’. The echoes of wartime starvation were unmistakable.” (Here Stevenson is citing the US “Centre for Economic Policy Research”.) Even if a complete list of sanctions were imposed on Russia, such a dire outcome is unlikely there. Russia’s agrarian sector still produces enough food to stave off utter starvation, and they also have access to African and Asian food markets. But sanctions—real sanctions—would return the country to the “deficit economy” I was familiar with in Moscow in the early 1990s: ration cards for cheese and milk products, a black market for fish and toilet paper, and a depressing assortment of unbecoming cabbages and carrots (and little else) in the grocery stores. Real sanctions would wipe out the illusory economic advancements in the nation’s two main cities.

Then, and only then, can we expect a broad opposition in Putin’s dictatorship to rise.

Brian Poole
Brian is a freelance writer and translator from Canada and lives in Berlin, Germany.